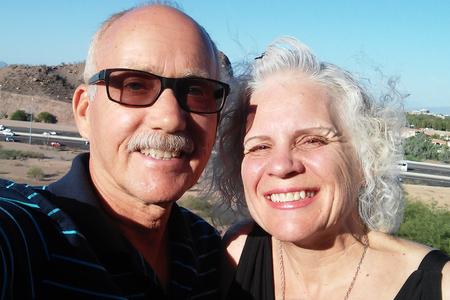 ​I studied classical guitar many years ago, when I was much younger, but gave it up due to the demanding ritual of daily practice sessions. I was always mystified by flute music, and then my daughter gave me a beautiful hand-crafted Native Flute for a birthday present.  At that same time, I was determined to play the Blues Harp. But after taking nearly three weeks to bend a note, I thought maybe it wasn't such a good idea. Not knowing what to do with the flute besides playing the scale, it sat on a shelf for five years until I met Vickie.

She talked about going to Sedona to hear a man play the flute on a mountain. Reluctantly, I followed her suggestions. Searching for the spot, I complained as we climbed. Then we heard the music, saw a small crowd and found a shade tree to sit under.

That's how my flute journey began. I don't know if I was changing my life, or the flute was changing it for me.

VICKIE
As a girl, I took years of piano lessons practicing many hours. My skill level was passable, but never enough to really enjoy playing. If I made a mistake I knew I was playing the music “wrong”. It was hard to play “right”.

A few years ago, a friend invited me to meet her in Sedona. We stayed at the home of a gentleman known as “the Red Rock Heart Man”. On Sunday morning we hiked to Warrior Rock to hear him ‘perform’.  He played for some time with no written music. I was enthralled.

Later, I noted that he must practice a long time to play like that. His answer surprised me. He said the music came from the people who were there that morning. I didn’t really understand what he meant.

When I discovered that Larry owned a Native Flute, I insisted that we go to Sedona to hear the Red Rock Heart man. It was a magical experience. That day I became the owner of my first flute.

I really liked that the notes are all harmonic, so there quite literally are NO WRONG NOTES. My flute journey has progressed, become more fun, and provided much joy from being able to play music without critique.

I hope you will find as much joy on your flute journey as I am on mine.